Governor Lima of Amazonas, Brazil, Issues an Open Call to the International Community for Covid Relief 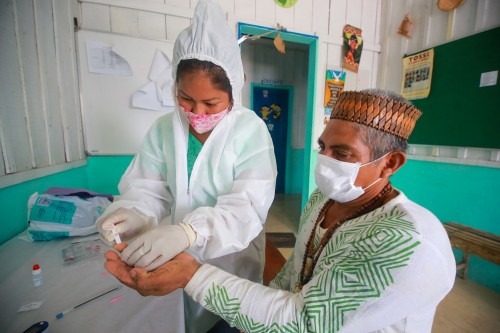 The state of Amazonas, Brazil is facing a second wave of Covid-19 infections which has had a dramatic impact on the state’s healthcare network. Hospitals are operating at maximum capacity and over 7,000 people have lost their lives. To tackle the health crisis and support the state’s efforts to combat the pandemic, Governor Wilson Lima has sent a request for support from the international community, donors, and non-governmental organizations. The efforts are being coordinated by Amazonas’ Secretary of Environment, Eduardo Taveira, who notes that the needs are diverse and range from financial resources to medical equipment, such as oxygen. In addition to supporting the capital Manaus in overcoming this dire situation, international aid will help to contain the crisis from worsening in the interior of Amazonas where traditional populations and Indigenous Peoples are most vulnerable.

Since the onset of the pandemic Governor Lima has been working to secure partnerships to mitigate the impacts of a second wave of Covid-19. As part of these efforts Governor Lima has released a public letter, developed with the support from the GCF Task Force, which seeks to mobilize donors and countries that normally support the state in environmental matters by asking them to also commit to help in the fight against Covid-19. The quicker partners can join forces and act to contain the crisis in the capital Manaus, the greater chance the state has to mitigate the impact of the second wave on the traditional and riverside communities, especially in the conservation units managed by the State Environment Secretariat