Dialogues for the Amazon: Brazilian Environmental Secretaries on the Fight Against Forest Fires 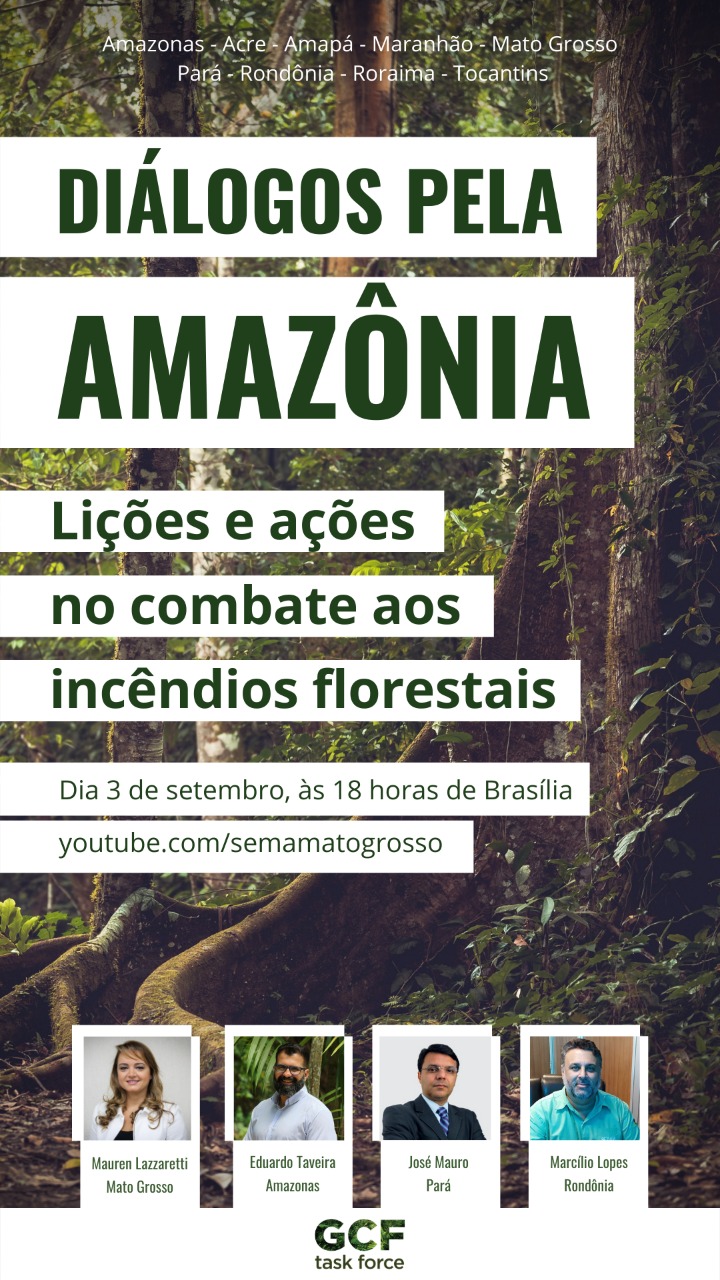 On Thursday, September 3rd, Brazilian GCF Task Force States will host Dialogues for the Amazon—a live conversation with Environmental State Secretaries on actions taken and lessons learned in the fight against forest fires. The online event will be conducted in Portuguese and will take place at 18:00 Brasilia Time (GMT+3) on the SEMA YouTube Chanel, and will be mediated by journalist Barbara Lins.

The nine Brazilian GCF Task Force States have been working intensively on policies to prevent and combat the fires that devastate forests and threaten biodiversity. Policies implemented by the States have incited a range of activities, from environmental education on the importance of avoiding fires, caring for affected wild animals, encouraging complaints, and major inspection operations resulting in the seizure of equipment and identification of criminals.

For the Secretary of Environment of Amazonas, Eduardo Taveira, the dialogue is an opportunity to reinforce the interest of all states that the forest remains standing, and that everyone is working in a committed way to make it happen.

“As we notice over the years the increase in deforestation and fires in the Amazon, there is an urgent need for dialogue between States to find definitive solutions, so that we can stabilize this growth and reduce illegality. This integration is a way of finding new ways of acting together, not only immediately, but also in the medium and long term, discussing income generation models and public policies that are more compatible with the reality of our biome.” –Eduardo Taveira, Secretary of Environment of Amazonas

Collective action in the work to protect the largest tropical forest in the world is increasingly necessary. For the Secretary of Environment of Mato Grosso, Mauren Lazzaretti, the joint work between the State governments, the productive sector, and the federal government becomes decisive for a quick response in combating fires.

“At a time when the structures are precarious and the States have the same demand, the integration of the forces of the federal and state entities is essential, in order to obtain positive and efficient results. When we share resources and information, we deliver better services to society and at a lower cost to public coffers.” –Mauren Lazzaretti, Secretary of Environment of Mato Grosso

The Secretary of Environment of Pará, Mauro Ó de Almeida, stresses that the integration between development and preservation of the forest is possible and integrated into Pará’s work. Amazônia Agora is Pará’s State Plan to promote sustainable development in the field through land and environmental regularization, technical support and access to credit lines for rural producers.

“It is important to turn the key from this deforestation culture, make rural producers understand that they can profit and produce more in a sustainable way, without degrading new areas.” –Mauro Ó de Almeida, Secretary of Environment of Pará

Rondônia, too, has been working intensively to combat illegal deforestation and fires, in partnership with the Environmental Police Battalion, Shock Battalion, Brazilian Army, IBAMA and ICMBio. According to the Secretary of State for Environmental Development, Marcílio Leite Lopes, environmental policies are based on conservation and development.

“We are at the forefront of actions to combat deforestation and fires, going beyond monitoring actions, we seek to guide people on what is allowed or not through environmental education.” –Marcílio Leite Lopes, Secretary of State for Environmental Development of Rondônia

Watch Dialogues for the Amazon live (in Portuguese) on SEMA’s YouTube channel.