GCF Members in Action at COP 22

This year’s 22nd Conference of the Parties (COP 22) to the UN Framework Convention on Climate Change (UNFCCC) has been coined the “The COP of Action,” promising to put the Paris Agreement into action. In response, jurisdictions from the Governors Climate and Forests Task Force (GCF) have been actively involved in demonstrating the critical role of subnational governments in the implementation of the Paris Agreement. Guided by the Rio Branco Declaration (RBD), a commitment to reduce deforestation by 80% by 2020, GCF jurisdictional efforts will be crucial in achieving the Paris Agreement by accelerating the implementation of Nationally Determined Contributions (NDCs), reducing deforestation, and closing the carbon gap. Participation in COP 22 from GCF member states and provinces from regions such as Mexico, Brazil, Indonesia, Nigeria, Peru, and the United States helped propel the advances of both the GCF’s unique subnational network and the global climate action community (see catalog of events for comprehensive list).

The arrival of the GCF network in Marrakech at the COP follows the momentum garnered in Jalisco, Mexico at the 2016 GCF Annual Meeting under the visionary leadership of the 2016 GCF Chair, Governor Aristoteles Sandoval. In Marrakech, Governor Sandoval and the Director of California Governor Jerry Brown’s Office of Planning and Research, Ken Alex, co-chaired the Under 2 MOU event organized by the Climate Group, which identified a plan to increase reporting from subnational governments and promote subnational leadership under the Paris Agreement. During this year’s COP, twenty-nine new signatories joined the Under 2 MOU, including GCF Task Force members East Kalimantan and West Kalimantan from Indonesia and Tabasco, Mexico. As a result, a total of 18 GCF members are part of the 165 jurisdictions endorsing the MOU.

Governor Sandoval (Jalisco), along with California representatives, and Cross River State Commissioner for Forestry and Climate Change, Dr. Alice Olok Ekwu, also attended the Climate Summit for Local and Regional Leaders where they shared insight from experiences within their states with fellow subnational leaders. At the Climate Summit, the Marrakech Road Map for Action, a global action framework towards localizing climate finance, was launched. Governor Sandoval’s dedication to climate action was also reflected in his promotion of an ambitious plan to reduce greenhouse gas emissions from all sectors within Jalisco, including land use, deforestation, and through initiatives such as the establishment of a “Green Fund” to reward environmental stewards.

The GCF Brazilian delegation included representatives from the States of Amazonas and Mato Grosso. Amazonas State Secretary of the Environment, Antonio Stroski, was involved in several side events organized by Fundação Amazonas Sustentável (FAS) and GCF’s Brazil Coordinator Instituto de Conservação e Desenvolvimento Sustentável da Amazônia (IDESAM). Secretary Stroski highlighted Amazonas’ climate efforts which include the promotion of green development and payments for environmental services to local communities, building on integrated intervention programs such as Bolsa Floresta, and encouraging participation from the private sector. As a result of efforts underway in Amazonas, the state still has 96% of its tropical forests intact (INPE/PRODES 2014), the most among any Brazilian state. As one of the founding members of the GCF Task Force, Amazonas has focused on reducing deforestation by preventing illegal logging and land encroachment due to the expansion of subsistence agriculture, amongst other causes. Secretary Stroski also participated in a side event organized by national Brazilian institutions that focused on the Amazon Fund and the national REDD+ Strategy.

The GCF’s RBD champions reduction in deforestation by both increasing collaboration with the private sector and linking production and protection activities. This approach was further explored during the “Jurisdictional Sustainability: A Bottom-Up Integrated Approach to Reducing Deforestation” panel organized by Earth Innovation Institute and the Southern Tropical Alliance. GCF Governor Victor Manuel Noriega, from San Martín, Peru, advocated for jurisdiction wide sustainability. Fernando Sampaio, the new Director of the Conserve, Produce, and Include (PCI) Program in Mato Grosso, a founding GCF member, also participated in this panel, as well as various other events during the COP including the Global Landscape Forum. He promoted the PCI initiative as a way to achieve both economic and environmental benefits by simultaneously maintaining productivity of major commodities and reducing deforestation. His strategy includes a combination of policies, incentives, and investments that could lead to preferential sourcing. Jeff Seabright, Chief Sustainability Officer at Unilever, contributed by confirming Unilever’s vision of establishing long-term sourcing agreements that will produce positive performance for environmental and social indicators. He emphasized that with a common vision, governments and the private sector can work together to achieve improved sustainability.

The culmination of “The COP of Action,” brings further resolve and commitment to the RBD and the Paris Agreement. COP22 may be over; however, GCF members will continue their dedication to reducing deforestation and carbon emissions through subnational leadership, partnerships, and innovation. You can follow these jurisdictions as they turn their commitments into action on both the GCF Task Force and Governors’ Climate and Forests Fund (GCFF) websites. 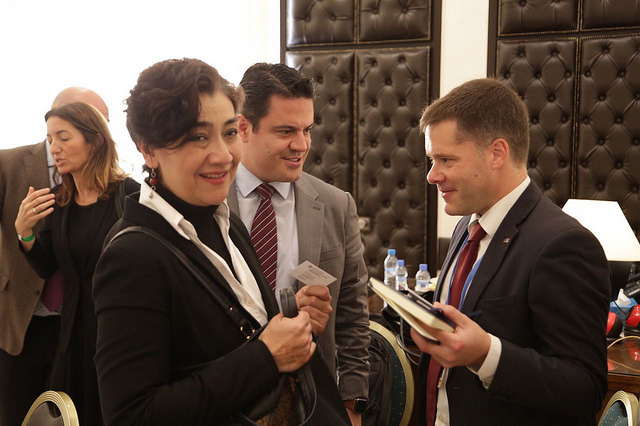