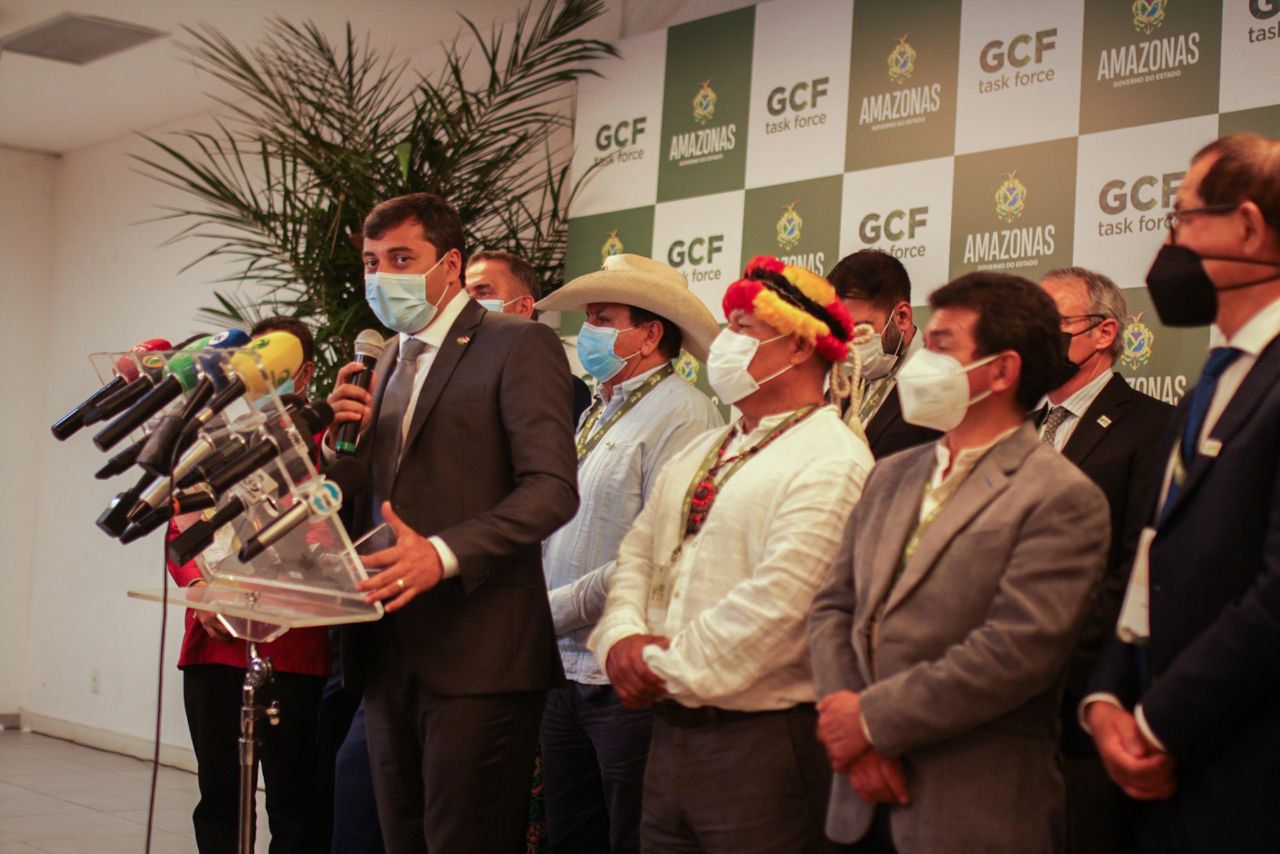 The Launch of ‘Guardians of the Forest’ and Manaus Action Plan were the highlights of the meeting of the governors’ task force in Manaus.

The governor of Amazonas, Wilson Lima, officially opened the 12th Annual Meeting of the Governors for Climate and Forests (GCF Task Force) this Thursday (17/03). Wilson Lima launched the Guardians of the Forest program, one of the largest Payments for Environmental Services (PES) systems in the world, and invited investors to get to know the Amazon.

At the opening of the event, they signed the Manaus Action Plan. The 12th meeting of the coalition of governors continues until this Friday (18/03).

Governor Wilson Lima, the current president of the task force, during a speech, highlighted that the people living in the Amazon are the most interested in the preservation of the forest. He made an appeal for big businessmen and companies to support initiatives to preserve the environment and bring development to those who live in the forest.

“The world today looks at the forest and only sees the trees. The world looks at the forest today and doesn’t see that, among the trees, there are real people living here. It is as if, just here in Brazil, 38 million citizens – a population greater than those of Norway, Finland, Denmark, Portugal and Sweden combined, simply did not exist. In the eyes of the world, today, we are 38 million invisible people”, highlighted Wilson Lima.

The event, held by the State Government, takes place until this Friday (03/18), at the Vasco Vasques Convention Center, and brings together the governors of Amazonas, Acre and Amapá, the deputy governor of Mato Grosso, in addition to five governors of Colombia, Mexico, Indonesia and Peru, and more than 150 leaders from different countries with tropical forests.

“I end my speech by making two invitations to everyone – from rich countries to Brazilians who live in the most developed regions of Brazil. The first: get to know the Amazon. The second: invest in the Amazon. Come and generate income and opportunity for people who live in the Amazon. Our people are hardworking, talented, and brave. We want and need everyone’s help to keep the forest standing and keep progressing to improve the lives of our children”, said Wilson Lima.

At the opening of the GCF meeting, Wilson Lima launched the selection notice for Civil Society Organizations (CSOs) that can implement and execute the Guardians of the Forest program, a restructuring of “Bolsa Floresta”. The non-profit entities that are interested in participating must submit an application to carry out administrative, financial and environmental management, under the supervision of the Secretary of State for the Environment (Sema).

Among the main novelties of the program is the 100% increase in the amount of remuneration paid to families living in State Conservation Units (UCs). The grant will extend from R$50 to R$100. There was also a 50.5% increase in the number of beneficiary families, from 9,400 to 14,150 beneficiaries.

In addition, the Guardians of the Forest program expanded the scope of the PSA: from 16 Conservation Units initially benefited, to 28 UCs and their surrounding areas including riverside, traditional and indigenous communities.

The document places as a priority, on the GCF task force agenda, in an unprecedented way, in order to fight against poverty, which still prevails in areas of tropical forests. With that, the Plan will bring the development of the bioeconomy as a structuring axis of any subnational initiative to combat illegal deforestation and to the development of a low-emissions economy.

The proposal of the GCF task force’s Manaus Action Plan is a mechanism to raise funds, in order to develop environmental strategies focused on strengthening traditional populations and reducing social inequalities of people living in the forest.

In addition to the MAP, Governor Wilson Lima also signed a Memorandum of Understanding (MOU) between the Brazilian Amazon members of the GCF and the United States Agency for International Development (USAID).

The partnership aims to support programs and projects of mutual interest, focusing on the conservation of Amazonian biodiversity, the sustainable use of natural resources and the development of partnerships with the private sector companies, in accordance with the availability of human and financial resources.

Land tenure regularization – In addition to launching the Guardians of the Forest program, Governor Wilson Lima also announced the delivery of Concessions to the Real Right of Use (CDRU) to residents of 13 Conservation Units (UC), benefiting more than 7,300 families.

The document grants the territory of the Conservation Units to traditional communities, guaranteeing the regularization of land in the protected area, proof of sustainable activities for social security purposes, in addition to access to government policies to access rural credit.

Science, technology and innovation – The opening of the meeting had also as its highlight the launch of the Amazônia +10 initiative, a partnership designed within the scope of the National Council of State Research Support Foundations (Confap) and the National Council of State Secretaries for ST&I Affairs (Consecti) to promote science, technology and innovation in the Amazon region.

The fund involves all Research Support Foundations (FAP’s) in Brazil, with an initial fund of R$ 100 million. The goal to be achieved is a funding of R$ 500 million, through partnerships with state research foundations, governments, the private sector and international organizations for the development of projects for Science, Technology and Innovation (ST&I) at the Legal Amazon region.