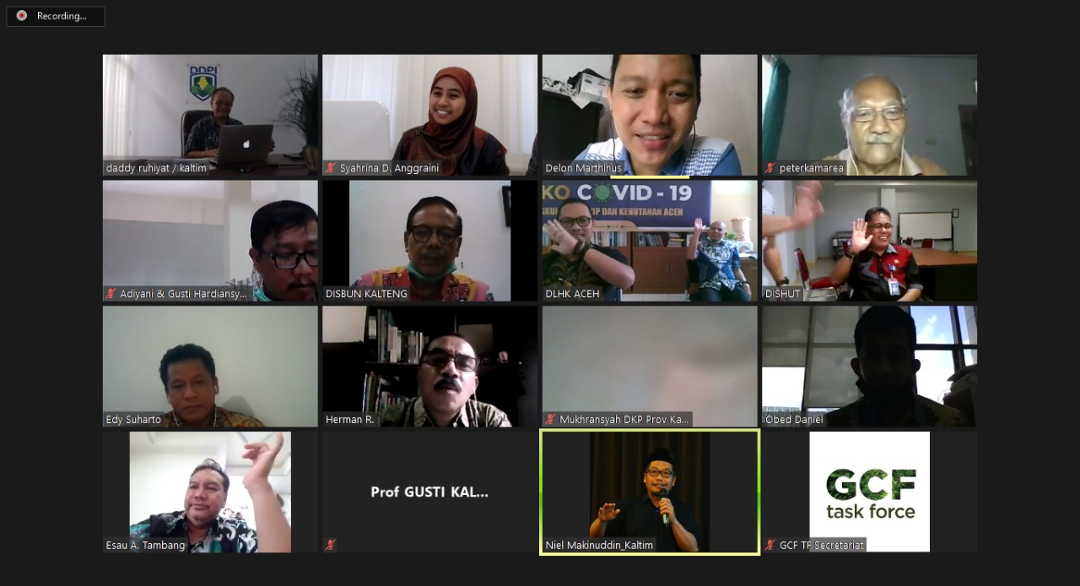 On May 14th, delegates from all seven GCF Task Force provinces in Indonesia gathered virtually to discuss their provincial responses to the COVID-19 pandemic and develop a plan for the provinces to continue to collaborate virtually in the coming months on issues related to deforestation, sustainable palm oil, and indigenous peoples and local communities.

The provinces of Aceh, West Kalimantan, and Central Kalimantan are leading efforts to advance the Regional Steering Committee on Sustainable Agriculture Indonesia (SCAI) this year, an initiative that is implementing the Call for Collaboration From the Private Sector, endorsed by the GCF Task Force in 2019.

Through the remainder of the year, Aceh, West Kalimantan and Central Kalimantan will work to collect data on palm oil smallholders, which will be integrated into databases with the support of partner organizations. In future years, these databases will be mobilized to support registration of independent smallholders whose land status is clean and clear, help guide the development of new environmentally friendly spatial plans, and facilitate the access of environmentally compliant smallholders to mills and refineries. Based on pilot results, the databases may be scaled to integrate additional commodities and provinces.

Members also discussed efforts to implement the Guiding Principles for Collaboration and Partnership Between Subnational Governments, Indigenous Peoples and Local Communities through Indonesia’s Regional Committee on Indigenous Peoples and Local Communities (IPLC) during the virtual meeting. The provinces of Papua and West Papua are currently developing a proposal with partners to begin implementing actions to advance the Guiding Principles with an initial focus on Indonesia’s Social Forestry program. Support is expected to begin in the second half on 2020.

Finally, members took the opportunity to celebrate Indonesia’s recent recognition for reducing emissions from deforestation by nearly 11 million tonnes between 2016-2017. This was more than twice the initial estimates of 4.8 million tonnes, and represents the progress Indonesia has made over the past decade in developing actions to combat forest loss. As a result of these achievements, the Government of Norway will provide results-based payments totaling $56 million to Indonesia later this year. Moving forward, GCF Task Force Indonesia members will continue to coordinate with national agencies, including the Environmental Estate Fund (BDLH), to determine mechanisms to distribute benefits and advance on the progress that has been made.