Subnational Solutions to Deforestation on Display at COP27: A recap of Sharm el-Sheikh from the Governors’ Climate and Forests Task Force 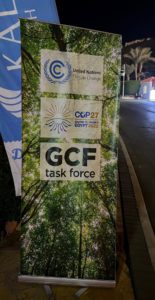 The Governors’ Climate and Forests Task Force (GCF Task Force) participated in the 27th Conference of the Parties (COP27) to the United Nations Framework Convention on Climate Change (UNFCCC) in Sharm el-Sheikh, Egypt during the second week of the conference (November 14-18, 2022). There were high-level talks, bilateral partnership discussions, celebrations, and re-engagement with the Brazilian President-elect Luiz Inácio Lula da Silva (Lula).

The primary goal of the GCF Task Force and its member jurisdictions was to continue highlighting the urgent need for – and power of – subnational climate action. Panel discussions focused on highlighting implementation of innovative financing mechanisms, harnessing the potential of carbon markets for Indigenous empowerment, and on implementing jurisdiction-scale programs to reduce deforestation while supporting livelihoods.

The GCF Task Force is a network of 39 subnational governments – states, provinces, regions, and departments from 10 countries covering a third of the world’s tropical forests. We’re a project of the Emmett Institute on Climate Change and the Environment at UCLA School of Law and UCLA’s Institute of the Environment and Sustainability, in partnership with the Institute of Behavioral Science at the University of Colorado, Boulder.

While national party negotiators were working through decision text and ultimately landing on the creation of a loss-and-damage fund (details to follow at COP28), the GCF Task Force sought to reinforce existing partnerships, build new ones, and increase financing around the Manaus Action Plan for a New Forest Economy (launched at our Annual Meeting in March 2022), the technical exchange of experiences hosted by the Government of San Martin, Peru in October 2022, and in the lead up to our next Annual Meeting in Yucatan, Mexico this coming February.

We had a full calendar supporting our member jurisdictions in their bilateral meetings with potential private sector and donor partners, carbon market actors such as the Architecture for REDD+ Transactions and the LEAF Coalition, and science and technology actors such as C-Trees.

The GCF Task Force also organized high-level dialogues for Governors and delegates with national development agencies, facilitated encouraging discussions around academic collaborations across member jurisdictions, and participated in side events where GCF Task Force Governors, senior delegates, and GCF Task Force Secretariat representatives presented on the incredible efforts and challenges throughout the network.

The GCF Task Force was proud to host several events of our own. This included an official side event (see agenda and video recording) where audience members learned about the current legal, political, economic, and technical actions and solutions underway throughout the GCF Task Force network – from Brazil to Peru, Mexico to Indonesia, and the U.S. to Côte d’Ivoire – as well as the critical need for true partnership between subnational governments and Indigenous territories, and received encouragement from California State Senator Henry Stern to keep advancing together.

It also included a celebratory reception where our delegation from Bélier, Côte d’Ivoire welcomed fellow Governors, Governors-elect, Indigenous leaders, environment secretaries, representatives of think tanks and non-profits, national development agencies from Norway and the US, academics, and others to network and learn from each other in a more relaxed setting than a formal panel.

Others have written about the various mixed negotiation outcomes and some positive advances for tropical forests through a Forest and Climate Leaders’ Partnership and other outcomes. For the GCF Task Force, the opportunity to gather at COP27 and share both what is working at the ground level and what needs more support was more important than ever. This was perhaps most evident in three sets of meetings that members of our network and Secretariat participated in:

First, we continue to push forward on finding ways to better engage across subnational governments and Indigenous Peoples and local communities. The GCF Task Force Global Committee of Indigenous Peoples and Local Communities met during panel discussions and separately to strategize on co-creating grant proposals for better funding mechanisms and urging implementation of Guiding Principles for Collaboration and Partnership between Subnational Governments, Indigenous Peoples and Local Communities. These discussions are ongoing, and we look forward to new advancements between now and the meeting in Yucatan, Mexico in February 2023.

Third, Brazilian President-elect Lula arrived at COP27 like a rockstar, and he met with our Brazilian member Governors and Environment Secretaries to discuss the imperative for federal-state engagement and partnership on reversing the deforestation rates in Brazil. This meeting reflected the necessity in Brazil of working across political parties and jurisdictional scales to take real, ambitious action to protect the Amazon. The GCF Task Force is eager to work with the incoming Lula administration in Brazil as well as with all levels – and parties – of Brazil’s government to promote the people, forest, and climate agenda that the Amazon, and the world, so desperately needs.

The GCF Task Force looks forward to building on the discussions and connections made at COP27, as well as to working to ensure subnational action supports implementation and increased ambition to protect forests, alleviate poverty, respect and advance rights, and address the climate crisis.