Forest fires are a problem that the environment faces year after year. The fight against forest fire requires collective efforts and commitments towards preventing fires in forests and jungles. Multiple factors derived from anthropogenic activities cause fires, and climate change continues to generate changing temperature patterns in the world, where Mexico is no exception, as it now produces drier and warmer climate cycles.

In this edition of the newsletter, we present the details of the closure of the project of the Investment Plan for Low Emission Rural Development of the State of Oaxaca. We also dedicate a space to specify action strategies of the entities that make up this work network facing the forest fire season this year. We consider it crucial to recognize the effort of the institutions involved in dealing with these disasters, but above all we recognize and honor the hard work of forest fighters, not just on July 11 when their work and value is nationally commemorated, but every day of the year.

The State of Oaxaca is undoubtedly a state of Mexico brimming with a vastly diverse cultural and natural heritage from which stems a strong commitment to sustainability and public policies aimed at the protection and responsible use of forests and their resources. As an example of this commitment, Oaxaca has participated for three years with the Governors’ Climate and Forests Task Force (GCF Task Force) as a robust, active, and proactive jurisdiction collaborating on projects that promote low-emission rural development (DRBE) for the State.

One example, beginning with the GCF Task Force in 2018, is the project of the Investment Plan for Low Emission Rural Development of the State of Oaxaca, designed by the Ministry of Environment, Energy and Sustainable Development of Oaxaca (SEMAEDESO), the State Forestry Commission (COESFO) with technical support from the International Union for Conservation of Nature (IUCN) financed with funds from the Norwegian Ministry for Climate and Environment through the United Nations Development Program (UNDP).

The objective of this important initiative was to improve planning tools, intersectoral coordination, and mobilization of both public and private resources to reduce the degradation and deforestation of forest landscapes. Last June, the official closure of the project led to the creation of the Inter-institutional Restoration Table, an institutional conglomerate that includes SEMAEDESO, COESFO, the Secretariat of Agricultural Development, Fisheries and Aquaculture (SEDAPA), the Coordination General of the State Committee for Planning for the Development of Oaxaca (CG-COPLADE), the Secretariat of Finance (SEFIN), and the Secretariat of Indigenous and Afro-Mexican Peoples (SEPIA) of the State Government.

This Inter-institutional Restoration Working Table will work towards both the implementation of the territorial planning instrument that seeks opportunities for productive restoration of landscapes, and the financing vehicle with which the Government of the State of Oaxaca and public and private institutions can make contributions (both elements were developed by IUCN). It is expected that these types of projects will serve as a watershed to continue developing and implementing DRBE strategies with an impact on sustainable development objectives, such as poverty reduction, food security, water security, job creation, reduction of the risk of deforestation, conservation of biodiversity and climate change mitigation.

To learn more about the project, visit www.oaxacabajoenemisiones.mx.

According to the National Forest Commission (CONAFOR), there are two seasons of forest fires in Mexico. The first season corresponds to the central, north, northeast, south and southeast areas of the country, which begins in January and ends in June; and the second, in the northwest of the country, which begins in May and ends in September; both coincide with the season of greatest drought in the Mexican Republic.

According to the latest CONAFOR report, through July 16 in just the year 2020, 5,423 forest fires were registered in the 32 states, affecting an area of ​​292,054 hectares. Of this surface, 93% corresponded to vegetation in the herbaceous and shrub strata and 7% to arboreal. 54% of these fires had agricultural activities and changes in land use as possible causes.

During the same season of 2019 (cut July 19), 7,035 fires had been registered in the country, affecting 568,078 hectares (95% herbaceous and shrubby vegetation and 5% arboreal). This represents a 23% decrease in the number of fires and a 49% decrease in terms of affected area compared to the same season last year. 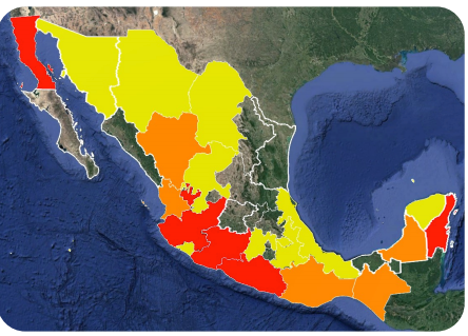 Red and orange: first 5 and second 5 states with the largest affected area. Yellow: 10 states that register average area of impact.

A total of 1,161 fires have occurred in the GCF Task Force Mexican States, affecting 115,432 hectares, 39.5% of the affected area nationwide. 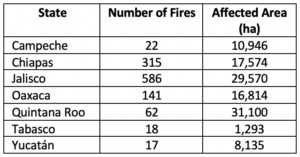 It is important to note that 6 of the 7 GCF Task Force jurisdictions are among the most affected in terms of surface with fire-sensitive vegetation; accumulating 45,764 hectares, which represents 75% of this type of affected area in the country.

Let us continue making progress in aligning forest and rural policies to lessen the environmental pressure on forests and jungles, while simultaneously strengthening means and capacities to guarantee rapid and effective attention to these incidents. The weekly reports of forest fires can be found at: https://www.gob.mx/conafor/documentos/reporte-semanal-de-incendios.